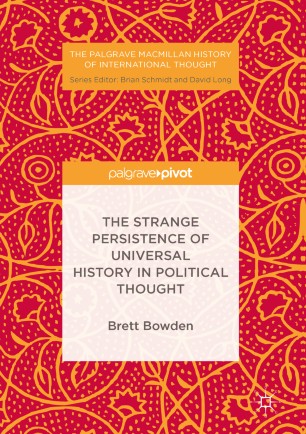 The Strange Persistence of Universal History in Political Thought

This book explores and explains the reasons why the idea of universal history, a form of teleological history which holds that all peoples are travelling along the same path and destined to end at the same point, persists in political thought. Prominent in Western political thought since the middle of the eighteenth century, the idea of universal history holds that all peoples can be situated in the narrative of history on a continuum between a start and an end point, between the savage state of nature and civilized modernity. Despite various critiques, the underlying teleological principle still prevails in much contemporary thinking and policy planning, including post-conflict peace-building and development theory and practice. Anathema to contemporary ideals of pluralism and multiculturalism, universal history means that not everyone gets to write their own story, only a privileged few. For the rest, history and future are taken out of their hands, subsumed and assimilated into other people’s narrative.

Brett Bowden is Professor of History and Politics at Western Sydney University. His recent major publications include Direct Hit: The Bombing of Darwin Post Office (2016), Civilization and War (2013), and the multi-award—winning Empire of Civilization: the Evolution of an Imperial Idea (2009).

“Bowden’s The Strange Persistence of Universal History in Political Thought is a strange book. It is also a book worth reading and thinking about. … It is worth reading, however, first as a history of the writing of universal history, and second as a way to think about the way our concepts of history shape society.” (Michael J. Douma, The Journal of Value Inquiry, Vol. 53, 2019)
Buy options