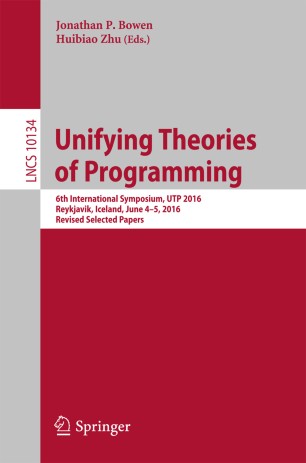 This book constitutes the refereed proceedings of the 6th International Symposium on Unifying Theories of Programming, UTP 2016, held in Reykjavik, Iceland, in June 2016, in conjunction with the

12th International Conference on Integrated Formal Methods, iFM 2016. The 8 revised full papers presented were carefully reviewed and selected from 10 submissions. They deal with the fundamental problem of combination of formal notations and theories of programming that define in various different ways many common notions, such as abstraction refinement, choice, termination, feasibility, locality, concurrency, and communication. They also show that despite many differences, such theories may be unified in a way that greatly facilitates their study and comparison.