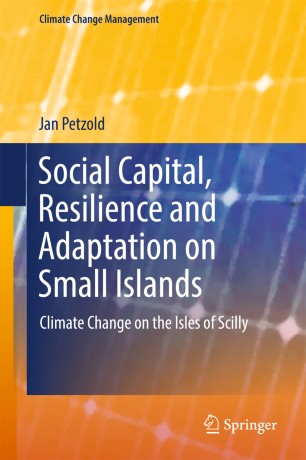 Climate Change on the Isles of Scilly

The book deals with the role of social capital regarding its potential to increase small islands’ adaptive capacity to climate change. The case study of the Isles of Scilly, UK, shows how social structures can play a very important role for climate change adaptation. It is argued that social features have to be understood in a non-deterministic and potentially ambivalent manner, according to their place-specific geographical, cultural and historical context. Only then, risk management and adaptation strategies can succeed and function in a sustainable way.
The findings have relevance for the further refinement of social capital theory and social emergence. Combined with the perspective of resilience, this approach is also relevant from a policy standpoint, given that small islands have been identified as hotspots not only due to their vulnerability, but also because they serve as examples for media and politics to advance the agenda of environmental protection. >