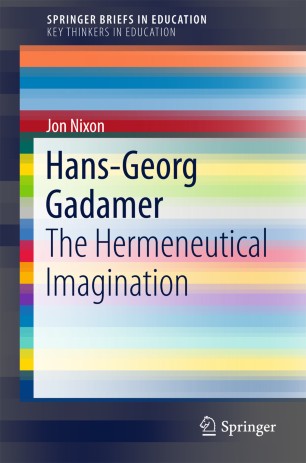 This book provides an introduction to Hans-Georg Gadamer’s thinking and shows how it might inform our own thinking about education as a lifelong process of engaging with one another and with the wider world. He insisted on the supreme importance of prior learning, but also on the unpredictability of human understanding and on the possibility of new and unforeseeable beginnings. Having lived through the catastrophe of two world wars, he became an important voice in the debate on the future of a reunified Germany and the role of the university in shaping the values and outlook of the new Europe.

His work is of immense significance for all those involved in the education of future generations.

'In Gadamer: The Hermeutical Imagination, Jon Nixon has pulled off quite a feat.  In his customary lucid, accessible and dialogical style, we are treated to a masterly tour that both opens the complex thinking of Hans-Georg Gadamer and draws out its implications for our understanding of education.   In the process, a strong critique emerges of contemporary instrumental approaches to education.  Many will assuredly gain much from this enjoyable text, both those interested in Gadamer as such and those working in the philosophy of education.'