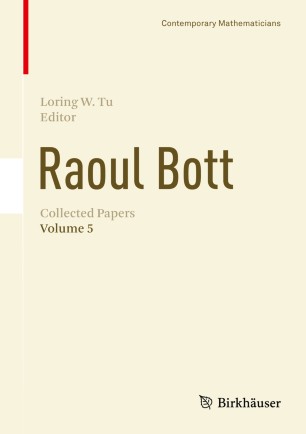 This book is the fifth and final volume of Raoul Bott’s Collected Papers. It collects all of Bott’s published articles since 1991 as well as some articles published earlier but missing in the earlier volumes. The volume also contains interviews with Raoul Bott, several of his previously unpublished speeches, commentaries by his collaborators such as Alberto Cattaneo and Jonathan Weitsman on their joint articles with Bott, Michael Atiyah’s obituary of Raoul Bott, Loring Tu’s authorized biography of Raoul Bott, and reminiscences of Raoul Bott by his friends, students, colleagues, and collaborators, among them Stephen Smale, David Mumford, Arthur Jaffe, Shing-Tung Yau, and Loring Tu. The mathematical articles, many inspired by physics, encompass stable vector bundles, knot and manifold invariants, equivariant cohomology, and loop spaces. The nonmathematical contributions give a sense of Bott’s approach to mathematics, style, personality, zest for life, and humanity. In one of the articles, from the vantage point of his later years, Raoul Bott gives a tour-de-force historical account of one of his greatest achievements, the Bott periodicity theorem. A large number of the articles originally appeared in hard-to-find conference proceedings or journals. This volume makes them all easily accessible.

It also features a collection of photographs giving a panoramic view of Raoul Bott's life and his interaction with other mathematicians.