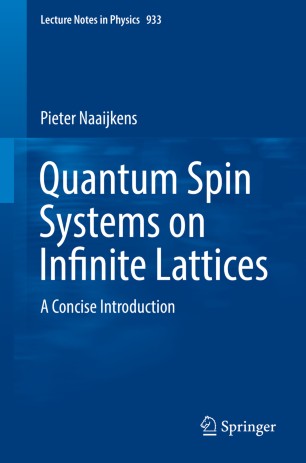 This course-based primer offers readers a concise introduction to the description of quantum mechanical systems with infinitely many degrees of freedom – and quantum spin systems in particular – using the operator algebraic approach. Here, the observables are modeled using elements of some operator algebra, usually a C*-algebra. This text introduces readers to the framework and the necessary mathematical tools without assuming much mathematical background, making it more accessible than advanced monographs.

The book also highlights the usefulness of the so-called thermodynamic limit of quantum spin systems, which is the limit of infinite system size. For example, this makes it possible to clearly distinguish between local and global properties, without having to keep track of the system size. Together with Lieb-Robinson bounds, which play a similar role in quantum spin systems to that of the speed of light in relativistic theories, this approach allows ideas from relativistic field theories to be implemented in a quantum spin system. Several related cases are discussed, demonstrating the merits of the operator algebraic approach.

Featuring representative worked-out examples and many exercises, this text is primarily targeted at graduate students and advanced undergraduates in theoretical physics or mathematics with a keen interest in mathematical physics. The material provides the necessary background and pointers to start exploring the recent literature. As such, it will also be useful for active researchers seeking a quick and comparatively self-contained introduction to the operator algebraic approach to quantum spin systems.