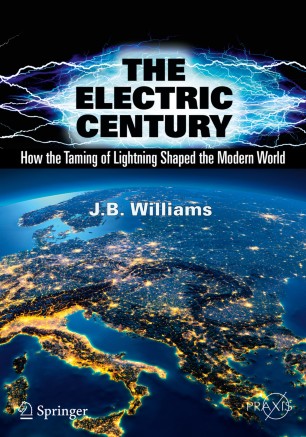 How the Taming of Lightning Shaped the Modern World

This book is about how electricity has profoundly changed the way we live, work, and play. Some twenty topics are covered, with an abundance of graphs and images to build a comprehensive picture. Each looks at the developments, and the people who initiated them, together with how one led to the next and their subsequent impact on society. Topics include electric supply, lighting through X-rays, and all those appliances that make our homes so comfortable.

Most homes at the end of the twentieth century were full of electrical equipment, much of which was regarded as essential. It ran from lights, washing machines, fridges, freezers, kettles, telephones and so on, to the more subtle things such as wipers and starter motors on cars. In 1900, in all but a tiny minority of houses, there were none of these things. It is very difficult for us now to imagine a world without electrical equipment everywhere, and yet it has only taken a century. The Electric Century< examines how we got from then to now.

The nineteenth is often described as the century of steam from the impact it had on employment and transport, and The Electric Century makes a similar claim as the description of the twentieth. Electricity and the equipment using it are so pervasive that they have affected every corner of modern life.