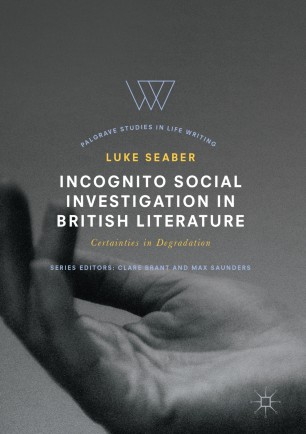 “Through his engaged and accessible analysis of social investigation, Seaber casts new light on matters such as identity, performativity, authenticity, subjectivity, and the relationship between the observer and the observed. This excellent study deserves to become the standard work on the topic.” — Dr Nick Hubble, Reader in English, Brunel University London, UK

“Luke Seaber’s book provides a much needed critical history of incognito social investigation, illuminating the methodology employed by the writers who went undercover, tracing major developments in the genre, and exploring its subcategories of casual wards, tramping, work, and settlement housing.  With his incisive analysis and thorough contextualization of texts, Seaber offers an astute overview of the genre and fresh insights on individual works.  This book is essential reading for a greater understanding of incognito social investigation in the nineteenth and twentieth centuries.” — Dr Laura Vorachek, Associate Professor at University of Dayton Ohio, USA

This book is the first full critical history of incognito social investigation texts – in other words, works detailing their authors’ experiences whilst pretending to be poor.  The most famous example is Down and Out in Paris and London, but there has been a vast array of other works in the genre since it was created in 1866 by James Greenwood’s ‘A Night in a Workhouse’.
It draws up a classification of incognito social investigation texts, dividing them into four subtypes. The first comprises those texts following most narrowly in James Greenwood’s footsteps, taking the extreme poor as their object of study. The next is the investigation of poverty through walking, for pedestrianism and poverty are fascinatingly linked.  The third is that of people looking at relative poverty rather than absolute, where authors take on badly-paid work in order to report on it, which is when incognito social investigation becomes very much something carried out by women.  We end looking at those incognito social investigators who settled in the areas they explored.
Not only will this book recover the history of a genre that has long been ignored, however, but it will also offer significant close reading of many of the texts that it places within the tradition(s) it discovers.
Luke Seaber taught at various Italian universities before coming to University College London, where he now teaches, as a Marie Curie research fellow in 2012.