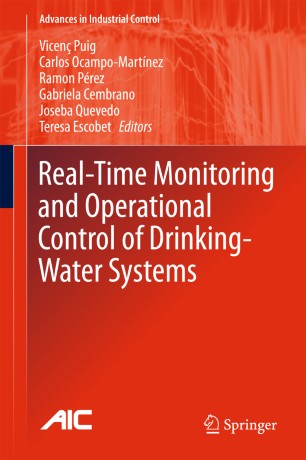 This book presents a set of approaches for the real-time monitoring and control of drinking-water networks based on advanced information and communication technologies. It shows the reader how to achieve significant improvements in efficiency in terms of water use, energy consumption, water loss minimization, and water quality guarantees.
The methods and approaches presented are illustrated and have been applied using real-life pilot demonstrations based on the drinking-water network in Barcelona, Spain.
The proposed approaches and tools cover:
• decision-making support for real-time optimal control of water transport networks, explaining how stochastic model predictive control algorithms that take explicit account of uncertainties associated with energy prices and real demand allow the main flow and pressure actuators—pumping stations and pressure regulation valves—and intermediate storage tanks to be operated to meet demand using the most susta
inable types of source and with minimum electricity costs;
• decision-making support for monitoring water balance and distribution network quality in real time, implementing fault detection and diagnosis techniques and using information from hundreds of flow, pressure, and water-quality sensors together with hydraulic and quality-parameter-evolution models to detect and locate leaks in the network, possible breaches in water quality, and failures in sensors and/or actuators;
• consumer-demand prediction, based on smart metering techniques, producing detailed analyses and forecasts of consumption patterns, providing a customer communications service, and suggesting economic measures intended to promote more efficient use of water at the household level.
Researchers and engineers working with drinking-water networks will find this a vital support in overcoming the problems associated with increased population, environmental sensitivities
and regulation, aging infrastructures, energy requirements, and limited water sources.
Advances in Industrial Control aims to report and encourage the transfer of technology in control engineering. The rapid development of control technology has an impact on all areas of the control discipline. The series offers an opportunity for researchers to present an extended exposition of new work in all aspects of industrial control.

Prof. Vicenç Puig received his Ph.D. Degree in Control Engineering in 1999 and his Telecommunications Engineering Degree in 1993, both from the Technical University of Catalonia (UPC), Barcelona, Spain. He is currently a Professor and Chair of the Automatic Control Department and leader of the Advanced Control Systems (SAC) research group at UPC. He is also a researcher at the Institut de Robòtica i Informàtica Industrial, a Joint Research Center of the UPC and CSIC (Spanish Research Council). His main research interests are advanced control (using MPC and LPV approaches), diagnosis, prognosis and fault-tolerant control of dynamic systems. He has led many industrial projects concerning the application of previous techniques to large-scale systems (mainly, in the water domain). He is currently the vice-chair of IFAC Technical Committee on Fault Detection, Supervision and Safety of Technical Processes (SAFEPROCESS). He has been involved in many European projects and networks and has published over 400 papers in international conference proceedings and about 120 in scientific journals. He has also edited the Springer Book “Identification and Control: The Gap between Theory and Practice”.
Prof. Carlos Ocampo received his Electronic Engineering degree and his MSc. degree in Industrial Automation from the National University of Colombia, Campus Manizales, in 2001 and 2003, respectively. In 2007, he received his Ph.D. degree in Control Engineering from the Technical University of Catalonia (Barcelona, Spain). After his PhD studies, he was with the ARC Centre of Complex Dynamic Systems and Control (University of Newcastle, Australia) as a postdoctoral fellow and with the Spanish National Research Council (CSIC) at the Institut de Robòtica i Informàtica Industrial (CSIC-UPC) in Barcelona as a Juan de la Cierva research fellow. Since 2011, he has served as an Assistant Professor of Automatic Control and Model Predictive Control at the Technic
al University of Catalunya’s Automatic Control Department (ESAII). Currently, he is Deputy Director of the Institut de Robòtica i Informàtica Industrial (CSIC-UPC), a Joint Research Center of the UPC and CSIC. His main research interests are focused on constrained model predictive control, large-scale systems management (partitioning and non-centralized control), and industrial applications (mainly related to the key scopes of water and energy). He has also edited the Springer Books “Model Predictive Control of Wastewater Systems” and “Transport of Water versus Transport Over Water”.
Prof. Ramon Pérez received his M.Sc. in Physics from the University of Barcelona in 1993 and his Ph.D. in Physics from the Technical University of Catalonia, Terrassa, Spain in 2003. He is currently a lecturer at the Department of Automatic Control at the latter university. His current research interests include control and supervision specially focused on water systems. He
is a member of the Advanced Control Systems Research Group at the Universitat Politècnica de Catalunya and the Technological Center of Manresa.

Dr. Gabriela Cembrano received her MSc and PhD degrees in Industrial Engineering and Automatic Control from the Polytechnical University of Catalonia (UPC). She has been a tenured researcher of the Spanish National Research Council (CSIC) at  the Institute of Robotics and Industrial Computing (IRI) since 1989. Since 2007, she is a

lso a member of the Scientific Direction of CETaqua Water technology Centre. Her main research area is Control Engineering. She has been involved in numerous industrial projects on Modelling and Optimal Control of drinking-water and urban drainage systems and she has taken part in several Spanish and European research projects in this field. Most recently, she has been is Scientific Director of EC project EFFINET
Prof. Joseba Quevedo received his M.Sc. in Electri
cal, Electronic, and Control Engineering in 1973 and the Ph.D. in control engineering from the University Paul Sabatier of Toulouse, France, in 1976 and his Ph.D. in Control Engineering from the Technical University of Catalonia in 1982. Since 1979 he has been with the Technical University of Catalonia, where he has been a full professor since 1990. His current research interests include advanced control, identification and parameter estimation, fault detection and diagnosis, and fault-tolerant control and their applications to large-scale systems and industrial processes. He has also edited the Springer Book “Identification and Control: The Gap between Theory and Practice”.
Prof. Teresa Escobet received her Industrial Engineering Degree  and her Ph. D in Industrial Engineering from the Technical University of Catalonia (UPC) in 1989 and 1997, respectively. She is currently an Associate Professor of Automatic Control and member of the Research Cente
r for Supervision, Safety and Automatic control (CS2AC) at UPC. Her main research interests are advanced control, systems  modelling, identification and parameters estimation, diagnosis,  prognoses and fault-tolerant control of dynamic systems.