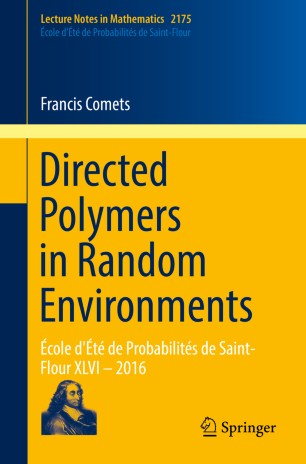 Analyzing the phase transition from diffusive to localized behavior in a model of directed polymers in a random environment, this volume places particular emphasis on the localization phenomenon. The main question
is: What does the path of a random walk look like if rewards and penalties are spatially randomly distributed?
This model, which provides a simplified version of stretched elastic chains pinned by random impurities, has attracted much research activity, but it (and its relatives) still holds many secrets, especially in high dimensions. It has non-gaussian scaling limits and it belongs to the so-called KPZ universality class when the space is one-dimensional. Adopting a Gibbsian approach, using general and powerful tools from probability theory, the discrete model is studied in full generality.
Presenting the state-of-the art from different perspectives, and written in the form of a first course on the subject, this monograph is aimed at researchers in probability or statistical physics, but is also accessible to masters and Ph.D. students.