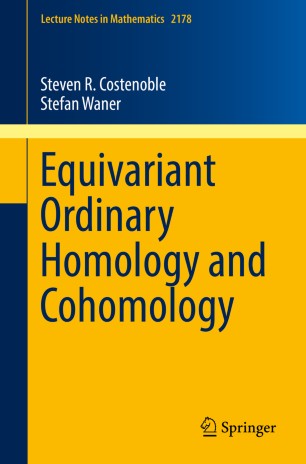 Filling a gap in the literature, this book takes the reader to the frontiers of equivariant topology, the study of objects with specified symmetries. The discussion is motivated by reference to a list of instructive “toy” examples and calculations in what is a relatively unexplored field. The authors also provide a reading path for the first-time reader less interested in working through sophisticated machinery but still desiring a rigorous understanding of the main concepts. The subject’s classical counterparts, ordinary homology and cohomology, dating back to the work of Henri Poincaré in topology, are calculational and theoretical tools which are important in many parts of mathematics and theoretical physics, particularly in the study of manifolds. Similarly powerful tools have been lacking, however, in the context of equivariant topology. Aimed at advanced graduate students and researchers in algebraic topology and related fields, the book assumes knowledge of basic algebraic topology and group actions.

“By reading this book the reader will certainly be able to gain a comprehensive grasp of all the key concepts and knowledge required for understanding equivariant homology and cohomology theories for compact Lie groups and thereby hopefully be able to consider respective new perspectives on this subject. This book consists of an introduction and three chapters with bibliography and indexes of notations and subjects.” (Haruo Minami, zbMATH 1362.55001, 2017)
Buy options