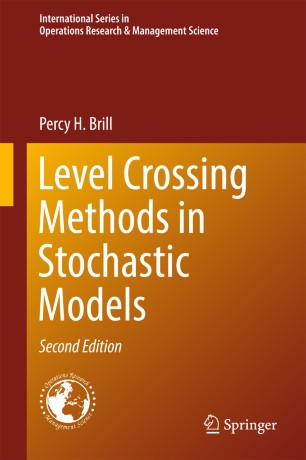 This is a complete update of the first edition of Level Crossing Methods in Stochastic Models, which was published in 2008.  Level crossing methods are a set of sample-path based mathematical tools used in applied probability to establish reliable probability distributions. Since the basis for solving any applied probability problem requires a reliable probability distribution, Level Crossing Methods in Stochastic Models, Second Edition is a useful tool for all researchers working on stochastic application problems, including inventory control, queueing theory, reliability theory, actuarial ruin theory, renewal theory, pharmacokinetics, and related Markov processes.
The second edition includes a new section with a novel derivation of the Beneš series for M/G/1 queues.  It provides new results on the service time for three M/G/I queueing models with bounded workload.  It analyzes new applications of queues where zero-wait customers get exceptional service, including several examples on M/G/1 queues, and a new section on G/M/1 queues.  Additionally, there are two other important new sections: on the level-crossing derivation of the finite time-t probability distributions of excess, age, and total life, in renewal theory; and on a level-crossing analysis of a risk model in Insurance.
The original Chapter 10 has been split into two chapters: the new chapter 10 is on renewal theory, and the first section of the new Chapter 11 is on a risk model. More explicit use is made of the renewal reward theorem throughout, and many technical and editorial changes have been made to facilitate readability.
Percy H. Brill, Ph.D., is a Professor emeritus at the University of Windsor, Canada. Dr. Brill is the creator of the level crossing method for analyzing stochastic models. He has published extensively in stochastic processes, queueing theory and related models, especially using level crossing methods.

Percy H. Brill is a Professor emeritus at the University of Windsor, Canada. He received a B.Sc. in Mathematics and Physics from Carleton University, Canada, an M.A. in Mathematical Statistics from Columbia University, U.S.A., and a Ph.D. in Industrial Engineering from the University of Toronto, Canada. He is the creator of the level crossing method used in stochastic models. He has published extensively in stochastic processes, and queueing, especially using level crossing methods.