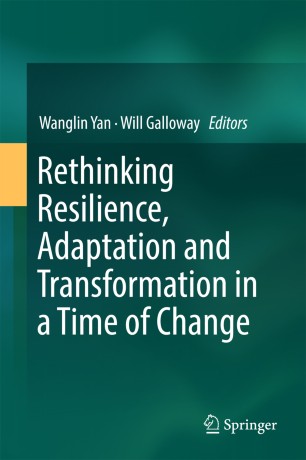 Rethinking Resilience, Adaptation and Transformation in a Time of Change

This book contributes to the literature on resilience, hazard planning, risk management, environmental policy and design, presenting articles that focus on building resilience through social and technical means. Bringing together contributions from Japanese authors, the book also offers a rare English-language glimpse into current policy and practice in Japan since the 2011 Tohoku disaster. The growth of resilience as a common point of contact for fields as disparate as economics, architecture and population politics reflects a shared concern about our capacity to cope with and adapt to change.
The ability to bounce back from hardship and disaster is essential to all of our futures. Yet, if such ability is to be sustainable, and not rely on a “brute force” response, innovation will need to become a core practice for policymakers and on-the-ground responders alike.
The book offers a valuable reference guide for graduate students, researchers and policy analysts who are looking for a holistic but practical approach to resilience planning.

Professor Wanglin Yan graduated from Wuhan Technical University of Surveying and Mapping with a Bachelor of Engineering degree in 1982. He received his Master’s degree in 1989 and his PhD in 1992 from the University of Tokyo’s Department of Civil Engineering. He is a specialist in Geographic Information System and Science and contributed to the design and re-construction plan for Sichuan, China after the city was struck by a massive earthquake in 2008. His recent research interests are in assessing the resiliency of ecosystems and human society, and devising and implementing adaptation plans in developed and developing countries.
Will Galloway graduated from the University of Manitoba with a Bachelor of Environmental Design in 1996 and a Master of Architecture in 2001. He received his PhD in Environmental Studies from the University of Tokyo’s Graduate School of Frontier Sciences in 2008.  He is a specialist in the compact city theory of urban planning and is a practicing architect. After working in the UK, Canada, and Japan he founded frontofficetokyo, a design office. He co-founded the Tokyo Chapter of Open Architecture Collaborative (previously Architecture For Humanity), a nonprofit organization focused on resilience and disaster reconstruction efforts around the world. His recent research interests include the multi-disciplinary integration of architecture, urban forms and energy production, as well as strategies for adaptation and resiliency building both before and after disasters.