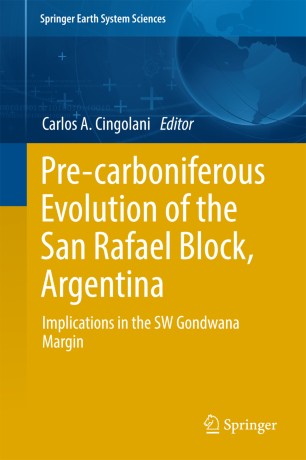 Implications in the Gondwana Margin

​This book offers a compilation of the global data on the pre-Carboniferous units of the San Rafael block, including petrography, geochemistry, isotope geochemistry and geochronology. It provides an extensive database for a broad range of experts in the scientific community.
For many years, scientists around the world have been interested in understanding the evolution of Gondwana and its interaction to Laurentia. The southern Pacific South America proto-Andean Gondwana margin is characterized during the Paleozoic by the presence of orogenic belts accreted to the cratonic areas. The San Rafael Block, located in the south-central area of the Mendoza Province in Argentina, is part of one of these terranes (Cuyania). It is composed of isolated outcrops of pre-Carboniferous units (Mesoproterozoic to Devonian in age), Upper Paleozoic sedimentary and volcaniclastic rocks, Permian–Triassic volcaniclastic and magmatic complees and Cenozoic volcanism.