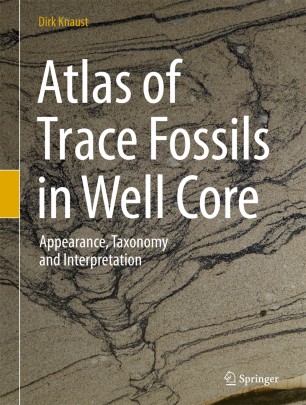 This book provides readers with a well-balanced blend of high-quality photographs, figures and accompanying texts on the identification of trace fossils, both in core and in outcrop. Ichnological data has become increasingly important in sedimentological and paleoenvironmental interpretations, not only in the exploration and exploitation of hydrocarbons but also in the characterization of aquifers and in scientific drilling.
Following an introduction to the study of trace fossils in core and an outline of ichnological basics, principles and concepts, the book provides detailed descriptions and interpretations of 39 trace fossils (ichnogenera) and associated features (such as bioturbate texture, plant roots and their traces, borings and pseudo-trace fossils) commonly encountered in well cores and in outcrop. The trace fossils are highlighted by their expression in well cores and illustrated with carefully prepared, eye-catching core photographs. This unique information is complemented by examples of trace fossils in outcrop, as well as relevant key figures from the literature.
Each description is presented in a consistent manner, stating the ichnogenus name and author in the title, followed by sections on the morphology and size, ichnotaxonomy, substrate, appearance in core, similar trace fossils, producers, ethology, depositional environment, ichnofacies, age, and reservoir quality. An extensive list of references per chapter for further reading rounds out the book, which is based on the author’s continuous work with trace fossils in core over the past two decades.