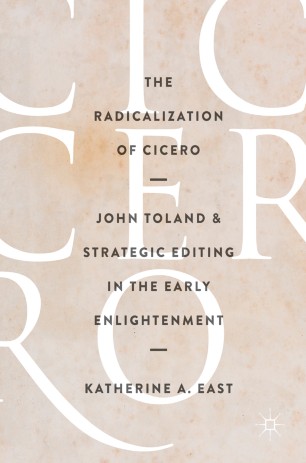 The Radicalization of Cicero

John Toland and Strategic Editing in the Early Enlightenment

This book uses a previously overlooked Neo-Latin treatise, Cicero Illustratus, to provide insight into the status and function of the Ciceronian tradition at the beginning of the eighteenth century, and consequently to more broadly illuminate the fate of that tradition in the early Enlightenment. Cicero Illustratus itself is the first subject for inquiry, mined for what its deliberately erudite and colorfully polemical passages of scholarly stratagems reveal about Ciceronian scholarship and the motives for exploring it within the context of early Enlightenment thought. It also includes an analysis of the role played by the Ciceronian tradition in the broader political and radical movements that existed in the Enlightenment, with particular attention paid to Cicero’s unexpectedly prominent position in major political and philosophical Republican and Erastian works. The subject of this book together with the conclusions reached will provide scholars and students with crucial new material relating to the classical tradition, the history of scholarship, and the intellectual history of the early Enlightenment.