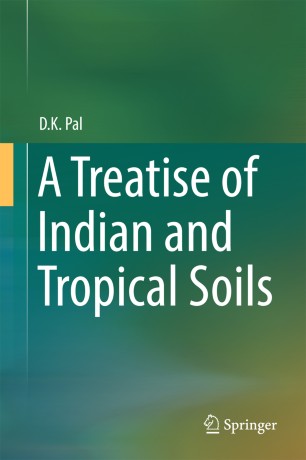 A Treatise of Indian and Tropical Soils

This book discusses how to apply the basic principles of pedology to the tropical soils of the Indian subcontinent, with an emphasis on ways to enhance crop productivity.

Documenting the significance of minerals in soils and their overall influence in soil science in terms of pedology, paleopedology, polygenesis and edaphology, it provides a knowledge base that is critical when attempting to bridge the gap between food production and population growth.

Dr. D.K. Pal obtained M.Sc. (Ag) degree in Agricultural Chemistry with specialization in Soil Science in 1970, and earned his Ph.D. degree in Agricultural Chemistry in 1976 from the Calcutta University. He worked as a DAAD Post-Doctoral Fellow at the Institute of Soil Science, University of Hannover, West Germany during 1980-81. He worked as the Principal Scientist and Head, Division of Soil Resource Studies, ICAR-NBSS & LUP, Nagpur, India and as a visiting scientist at the International Crops Research Institute for the Semi-Arid Tropics, Telangana.


Dr. Pal’s work on the major soil types of tropical environments of India has expanded the basic knowledge in pedology, paleopedology, soil taxonomy, soil mineralogy, soil micromorphology, and edaphology. He also created an internationally recognized school of thought on the development and management of the Indian tropical soils, and has mentored several M.Sc. and Ph.D. students of Land Resource Management. He has delivered numerous prestigious invited lectures at national and international meets and served as a reviewer for many journals of national and international repute, and contributed reviews and book chapters for national and international publishers. Dr. Pal is the life member of many professional national societies in soil and earth science, and has also been conferred with many national awards and fellowships.