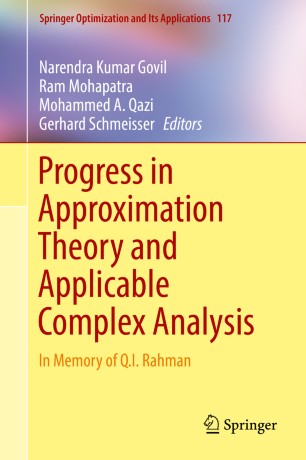 In Memory of Q.I. Rahman

Part of the Springer Optimization and Its Applications book series (SOIA, volume 117)

Current and historical research methods in approximation theory are presented in this book beginning with the 1800s and following the evolution of approximation theory via the refinement and extension of classical methods and ending with recent techniques and methodologies. Graduate students, postdocs, and researchers in mathematics, specifically those working in the theory of functions, approximation theory, geometric function theory, and optimization will find new insights as well as a guide to advanced topics.

The chapters in this book are grouped into four themes; the first,  polynomials (Chapters 1 –8), includes inequalities for polynomials and rational functions, orthogonal polynomials, and location of zeros. The second, inequalities and extremal problems are discussed in Chapters 9 –13. The third, approximation of functions, involves the approximants being polynomials, rational functions, and other types of functions and are covered in Chapters 14 –19. The last theme, quadrature, cubature and applications, comprises the final three chapters and includes an article coauthored by Rahman.

This volume serves as a memorial volume to commemorate the distinguished career of Qazi Ibadur Rahman (1934–2013) of the Université de Montréal. Rahman was considered by his peers as one of the prominent experts in analytic theory of polynomials and entire functions. The novelty of his work lies in his profound abilities and skills in applying techniques from other areas of mathematics, such as optimization theory and variational principles, to obtain final answers to countless open problems.