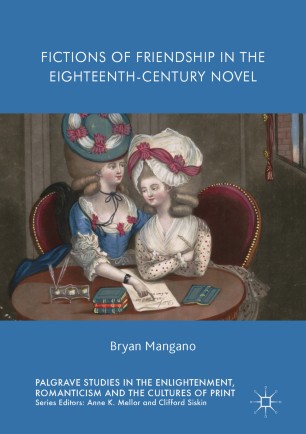 Fictions of Friendship in the Eighteenth-Century Novel

Part of the Palgrave Studies in the Enlightenment, Romanticism and the Cultures of Print book series (PERCP)

This book explores the reciprocal influence of friendship ideals and narrative forms in eighteenth-century British fiction. It examines how various novelists, from Samuel Richardson to Mary Shelley, drew upon classical and early modern conceptions of true amity as a model of collaborative pedagogy. Analyzing authors, their professional circumstances, and their audiences, the study shows how the rhetoric of friendship became a means of paying deference to the increasing power of readerships, while it also served as a semi-covert means to persuade resistant readers and confront aesthetic and moral debates head on. The study contributes to an understanding of gender roles in the early history of the novel by disclosing the constant interplay between male and female models of amity. It demonstrates that this gendered dialogue shaped the way novelists imagined character interiority, reconciled with the commercial aspects of writing, and engaged mixed-sex audiences.