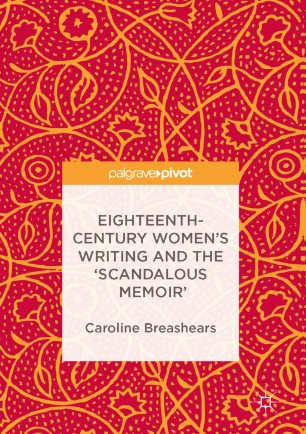 This book contributes to the literary history of eighteenth-century women’s life writings, particularly those labeled “scandalous memoirs.” It examines how the evolution of this subgenre was shaped partially by several innovative memoirs that have received only modest critical attention. Breashears argues that Madame de La Touche’s Apologie and her friend Lady Vane’s Memoirs contributed to the crystallization of this sub-genre at mid-century, and that Lady Vane’s collaboration with Tobias Smollett in The Adventures of Peregrine Pickle resulted in a brilliant experiment in the relationship between gender and genre. It demonstrates that the Memoirs of Catherine Jemmat incorporated influential new strategies for self-justification in response to changing kinship priorities, and that Margaret Coghlan’s Memoirs introduced revolutionary themes that created a hybrid: the political scandalous memoir. This book will therefore appeal to scholars interested in life writing, women’s history, genre theory, and eighteenth-century British literature.
Caroline Breashears is Associate Professor of English at St. Lawrence University in Canton, New York, USA. Her publications include essays about novels and eighteenth-century women’s memoirs.