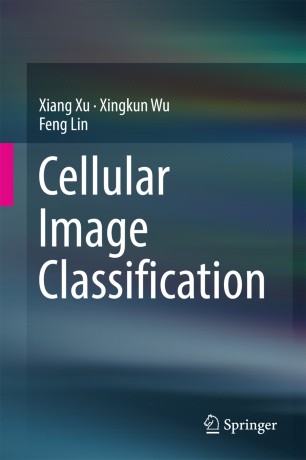 This book introduces new techniques for cellular image feature extraction, pattern recognition and classification. The authors use the antinuclear antibodies (ANAs) in patient serum as the subjects and the Indirect Immunofluorescence (IIF) technique as the imaging protocol to illustrate the applications of the described methods. Throughout the book, the authors provide evaluations for the proposed methods on two publicly available human epithelial (HEp-2) cell datasets: ICPR2012 dataset from the ICPR'12 HEp-2 cell classification contest and ICIP2013 training dataset from the ICIP'13 Competition on cells classification by fluorescent image analysis.
First, the reading of imaging results is significantly influenced by one’s qualification and reading systems, causing high intra- and inter-laboratory variance. The authors present a low-order LP21 fiber mode for optical single cell manipulation and imaging staining patterns of HEp-2 cells. A focused four-lobed mode distribution is stable and effective in optical tweezer applications, including selective cell pick-up, pairing, grouping or separation, as well as rotation of cell dimers and clusters. Both translational dragging force and rotational torque in the experiments are in good accordance with the theoretical model. With a simple all-fiber configuration, and low peak irradiation to targeted cells, instrumentation of this optical chuck technology will provide a powerful tool in the ANA-IIF laboratories. Chapters focus on the optical, mechanical and computing systems for the clinical trials. Computer programs for GUI and control of the optical tweezers are also discussed.
to more discriminative local distance vector by searching for local neighbors of the local feature in the class-specific manifolds. Encoding and pooling the local distance vectors leads to salient image representation. Combined with the traditional coding methods, this method achieves higher classification accuracy.
Then, a rotation invariant textural feature of Pairwise Local Ternary Patterns with Spatial Rotation Invariant (PLTP-SRI) is examined. It is invariant to image rotations, meanwhile it is robust to noise and weak illumination. By adding spatial pyramid structure, this method captures spatial layout information. While the proposed PLTP-SRI feature extracts local feature, the BoW framework builds a global image representation. It is reasonable to combine them together to achieve impressive classification performance, as the combined feature takes the advantages of the two kinds of features in different aspects.
Finally, the authors design a Co-occurrence Differential Texton (CoDT) feature to represent the local image patches of HEp-2 cells. The CoDT feature reduces the information loss by ignoring the quantization while it utilizes the spatial relations among the differential micro-texton feature. Thus it can increase the discriminative power. A generative model adaptively characterizes the CoDT feature space of the training data. Furthermore, exploiting a discriminant representation allows for HEp-2 cell images based on the adaptive partitioned feature space. Therefore, the resulting representation is adapted to the classification task. By cooperating with linear Support Vector Machine (SVM) classifier, this framework can exploit the advantages of both generative and discriminative approaches for cellular image classification.
The book is written for those researchers who would like to develop their own programs, and the working MatLab codes are included for all the important algorithms presented. It can also be used as a reference book for graduate students and senior undergraduates in the area of biomedical imaging, image feature extraction, pattern recognition and classification. Academics, researchers, and professional will find this to be an exceptional resource.