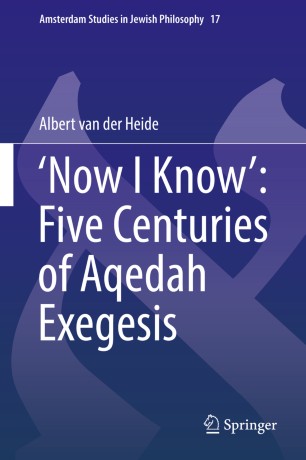 This book describes how medieval Jewish Bible scholars sought to answer the question of what is meant by the Angel’s message from God to Abraham: ‘Now I Know’, as written in Genesis 22 verse 12. It examines these scholars’ comments on the nineteen verses in Genesis that tell the story of Abraham’s readiness to sacrifice his own son Isaac, the Aqedat Yiṣḥaq. It explores the answers they found to the question of what, indeed, this story is trying to tell us. Is it a drastic way to condemn the practice of child sacrifice? Does it call for replacing human sacrifices with animal sacrifices? Is it a trial by which the Almighty tests the fidelity of one of His followers? Or is it His way to show the world the nature of true belief?

The book starts with an introduction to familiarize readers with the many and varied manifestations of the Aqedah theme in Jewish culture and with the developments of medieval Jewish Bible exegesis in general. Next, it offers translations and analyses of the classical medieval Jewish Bible commentaries that deal with the exegesis of Genesis 22, exploring the many angles from which the Aqedah story has been understood. No less than five centuries of medieval Aqedah exegesis are reviewed, from Saadya (882-942) to Isaac Abrabanel (1437-1508). These texts from the commentaries are combined with hermeneutical key passages by Moses Maimonides, Joseph Ibn Kaspi, Ḥasdai Crescas, and others, which were familiar to the minds of the exegetes, or which, conversely, reflect the impact of biblical Aqedah exegesis on religious thought. Together, the passages discussed illustrate the growth and development of Jewish Bible exegesis in dialogue with the rabbinic sources and with the various trends of thought and theology of their times. The consistent focus on the Aqedah constitutes a unifying theme, while the insights presented here greatly advance our understanding of the various developments in medieval Jewish Bible exegesis.