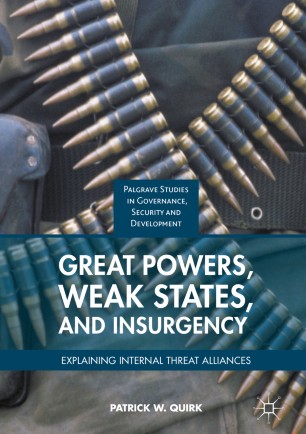 Part of the Governance, Security and Development book series (GSD)

This book offers an original and theoretically rich examination into the dynamics of alliances that great powers and weak states form to defeat threats, such as rebellion or insurgency, within the smaller state’s borders. The author analyzes contemporary examples of such “internal threat alliances,” including Russia’s collaboration with Syria’s Assad regime to defeat anti-government rebels and US cooperation with Colombia’s government to defeat leftist insurgents. In each case, the weaker state’s leadership wanted to remain in power while the great power sought to safeguard its interests linked to the regime’s stability. The book adds to International Relations theory by presenting a distinct conceptual framework that explains why internal threat alliances form, why some are more cohesive than others, and why some are effective while others are not. It thus promises to be of interest to IR scholars and students working in the areas of security studies, alliance dynamics, political violence, and civil war, but also to policy-makers grappling with how to salvage interests, such as access to natural resources or regional stability, imperilled by violence in weak states.