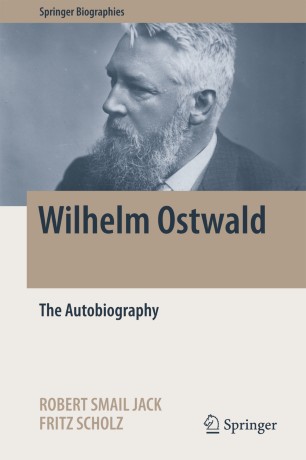 This book is the translated and commented autobiography of Wilhelm Ostwald (1853-1932), who won the Nobel Prize for Chemistry in 1909. It is the first translation of the German original version “Lebenslinien: Eine Selbstbiographie,” published by Ostwald in 1926/27, and has been painstakingly translated. The book includes comments and explanations, helping readers to understand Ostwald’s text in the historical context of Germany at the beginning of the 20th century.
In his autobiography, Ostwald describes his impressive research career and his life from his own personal view. Readers will find information on how Ostwald immortalized himself through his research on catalysis, chemical equilibria, technical chemistry, and especially as one of the founders of modern physical chemistry. His broad interests in science, ranging from philosophy to the theory of colors and the idea of a universal scientific language are further remarkable aspects covered.
This work will appeal to a broad audience of contemporary scientists: Wilhelm Ostwald has been tremendously influential for the development of chemistry and science, and many of today’s best-known international scientific schools can be traced back to Ostwald’s students. Ostwald was active in Germany and what is now Latvia and Estonia, while also travelling to the USA, England and France. In his discussions and analyses of the working conditions of the time, readers will find many issues reflected that continue to be of relevance today.

Robert Smail Jack is an emeritus professor from the Institute for Immunology and Transfusion Medicine, University of Greifswald, Germany. A native English speaker who has been living in Germany for many years, he has a vital interest in the history of science, and in making historical facts available for a broader audience. Combined with his scientific background, this made him an ideal candidate for translating Wilhelm Ostwald’s autobiography.
Fritz Scholz is the Chair of Analytical and Environmental Chemistry at Greifswald University’s Institute of Biochemistry. He has several years experience as an editor and author, e.g. as Editor-in-Chief of the Journal of Solid State Electrochemistry, of the new textbook journal ChemTexts, as Series Editor for the book series Monographs in Electrochemistry, and numerous book projects, in particular in the field of Electrochemistry. In his spare time, Fritz Scholz has a vital interest in the history of science, especially of chemistry and physics.
Together the two editors form an optimal team to provide a painstakingly accurate translation of Wilhelm Ostwald’s autobiography, enriched with explanatory comments and background information to help readers understand the historical context. Wilhelm Ostwald was one of the most outstanding personalities in physical chemistry in the early 20th century, and has left enormous impacts still visible today. In his autobiographical reflections, readers will find a wealth of information, which will open up a new perspective on the historical development of physical chemistry as experienced by an eyewitness. Robert Jack and Fritz Scholz have now made this record of contemporary scientific history available for an international audience for the first time.

“Ostwald was well known as an engaging writer, and this translated work is very readable. The book provides interesting insight into the development of chemistry and is recommended to libraries that support a history of science program. Summing Up: Recommended. Upper-division undergraduates and above; faculty and professionals.” (H. E. Pence, Choice, Vol. 54 (12), August, 2017)
“‘Wilhelm Ostwald: The Autobiography’ is an important contribution to the history of physical chemistry. It restores Ostwald to his rightful place as one of the founders of modern electrochemistry. It also sheds light on the extraordinary efflorescence of German science in fin de siècle Europe. I would recommend the book to anyone with an interest in the sociology of science or the history of physical chemistry.” (Stephen Fletcher, Journal of Solid State Electrochemistry, Vol. 21, 2017)
Buy options