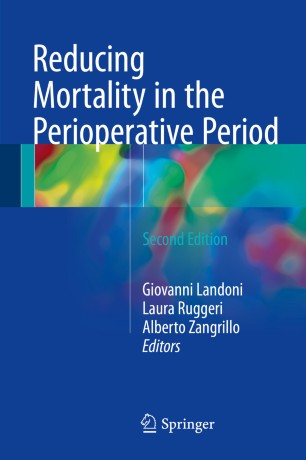 Reducing Mortality in the Perioperative Period

This second edition presents the first update on a consensus process during which all evidence from the literature with a survival benefit in the perioperative period was gathered, and in which 500 physicians from 61 countries worked to confirm the findings.

Perioperative morbidity and mortality currently represent a public health problem, as mortality alone is 1-4% in Western countries. Surprisingly, randomized evidence of survival benefit in the perioperative period is available for only 12 topics, while two drugs have been demonstrated to increase mortality. This book offers a complete description of each topic with updated evidence from the literature. Each chapter deals with a specific drug or technique and is structured into the following: background knowledge, main evidence from the literature, and a practical how-to section. Lastly, the book describes in detail the consensus process used, which served to reinforce the systematic review and which is currently being used and improved in other settings with growing success.

Written by respected international experts, Reducing Mortality in the Perioperative Period, 2nd ed. will be of interest to a wide variety of specialists, including anesthesiologists, intensivists, surgeons and cardiologists.

Giovanni Landoni is currently an Associate Professor at Vita-Salute San Raffaele University, Milan, where he works as Head of Research in the Department of Anesthesia and Intensive Care, San Raffaele Scientific Institute. Dr. Landoni is the Italian member of the Representative Council of the European Association of Cardiothoracic Anesthesiologists (EACTA, 2012–17). He is a past Vice-President of the Italian Association of Cardiothoracic Anesthesiologists (ITACTA) and a member of the ECMO team at San Raffaele Scientific Institute. He serves on the editorial boards of several international journals and his strong clinical and research interests in intensive care and anesthesia have resulted in more than 400 scientific publications, including more than 250 in indexed journals (he has an H index of 31).

Laura Ruggeri is a Resident at the Dept. of Anesthesia and Intensive Care,San Raffaele Scientific Institute and Vita-Salute San Raffaele University, Milan (Italy). Dr. Ruggeri has authored several publications, serves on the editorial board of Heart, Lung and Vessels and as a guest reviewer for many scientific journals.

Alberto Zangrillo is a Full Professor of Anesthesiology and Intensive Care, Head of Dept. of Anesthesia and Intensive Care at San Raffaele Scientific Institute and Vita-Salute San Raffaele University, and Vice-rector for clinical activities at Vita-Salute San Raffaele, Milan, Italy, the largest Italian surgical hospital. Dr. Zangrillo is among the world’s top 10 fastest publishing clinical scientists in the field of anesthesia and the author of more than 500 scientific publications on intensive care (H index of 33). He has participated as principal investigator in 32 randomized controlled trials. He was decorated with the title of Knight of the Order of Merit of the Italian Republic by the President of the Republic in June 2004 and with the title of Commander by President of the Republic Giorgio Napolitano in December 2010.

“This is a concise and precise collection of interventions that are known to impact perioperative survival. It is in a class of its own. Of all the books that claim to provide information that can help readers become better clinicians, only this one meets the challenge. It's a must read for every anesthesiologist, internist, and surgeon regardless of their experience or training.” (Tariq M. Malik, Doody's Book Reviews, November, 2017)

“This book details the process by which the relevant interventions were identified and researched in detail, followed by an in-depth look at the 13 treatment modalities in question. … This book is a thoroughly useful reference guide for those working within the field of perioperative medicine, bringing together a wealth of useful clinical information into a handy compendium.” (Harjot Singh and Ryan O’Leary, Anesthesia & Analgesia, Vol. 125 (4), October, 2017)
Buy options