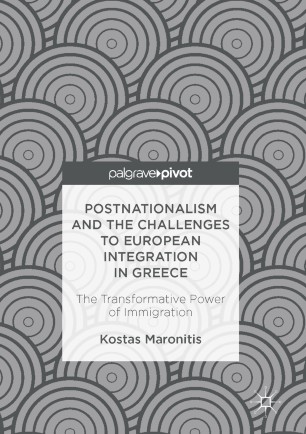 Postnationalism and the Challenges to European Integration in Greece

The Transformative Power of Immigration

This book is a study into how immigration is transforming the EU and its member-states. Kostas Maronitis contends that immigration creates utopian and dystopian visions of the European project. These visions can be found in the immigration detention centers and the fences between member-states, the dead bodies on Europe’s shores, the electoral success of far-Right parties, and in the way migrants and refugees view Europe as a land of rights and equality. Maronitis locates the transformative power of immigration at the intersection of sentiments regarding national and ethnic hierarchies with a policy framework constructed around the presence of migrants and refugees in Europe. By examining the utopian and dystopian transformation of the EU and of Greece as its borderland, the author challenges established notions of integration, citizenship and nationality on new intellectual and political terms. The book will be of use to students and scholars specializing in migration, EU policy and Greece, and will have a wider appeal for those interested in the ongoing debate surrounding the EU and immigration.

Kostas Maronitis is Lecturer at Leeds Trinity University, UK. His research interests focus on the theory and politics of immigration and European integration. He has published articles on immigrant detention, the politics of fear, networks of protest, and diasporic cultural practices.