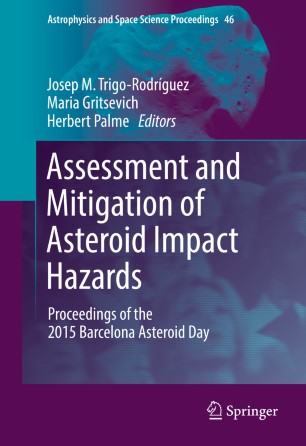 Proceedings of the 2015 Barcelona Asteroid Day

This volume is a compilation of the research presented at the International Asteroid Day workshop which was celebrated at Barcelona on June 30th, 2015. The proceedings discuss the beginning of a new era in the study and exploration of the solar system’s minor bodies. International Asteroid Day commemorates the Tunguska event of June 30th, 1908. The workshop’s goal was to promote the importance of dealing proactively with impact hazards from space. Multidisciplinary experts contributed to this discussion by describing the nature of comets and asteroids along with their offspring, meteoroids. New missions to return material samples of asteroids back to Earth such as Osiris-REx and Hayabusa 2, as well as projects like AIM and DART which will test impact deflection techniques for Potentially Hazardous Asteroids encounters were also covered.

The proceedings include both an outreach level to popularize impact hazards and a scientific character which covers the latest knowledge on these topics, as well as offering proposals of promising new techniques that will help gain new insights of the properties of these challenging bodies by studying meteoroids and meteorites. Asteroids, comets, meteoroids and meteorites are introduced with descriptions of their nature, origin, and solar system pathways.