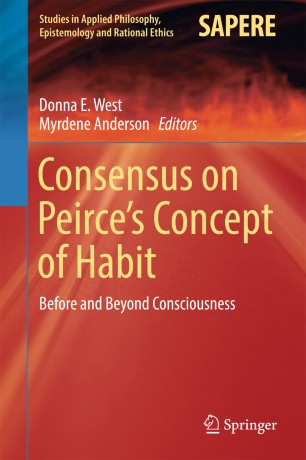 Consensus on Peirce’s Concept of Habit

Before and Beyond Consciousness

This book constitutes the first treatment of C. S. Peirce’s unique concept of habit. Habit animated the pragmatists of the 19th and early 20th centuries, who picked up the baton from classical scholars, principally Aristotle. Most prominent among the pragmatists thereafter is Charles Sanders Peirce. In our vernacular, habit connotes a pattern of conduct. Nonetheless, Peirce’s concept transcends application to mere regularity or to human conduct; it extends into natural and social phenomena, making cohesive inner and outer worlds. Chapters in this anthology define and amplify Peircean habit; as such, they highlight the dialectic between doubt and belief. Doubt destabilizes habit, leaving open the possibility for new beliefs in the form of habit-change; and without habit-change, the regularity would fall short of habit – conforming to automatic/mechanistic systems. This treatment of habit showcases how, through human agency, innovative regularities of behavior and thought advance the process of making the unconscious conscious. The latter materializes when affordances (invariant habits of physical phenomena) form the basis for modifications in action schemas and modes of reasoning. Further, the book charts how indexical signs in language and action are pivotal in establishing attentional patterns; and how these habits accommodate novel orientations  within event templates. It is intended for those interested in Peirce’s metaphysic or semiotic, including both senior scholars and students of philosophy and religion, psychology, sociology and anthropology, as well as mathematics, and the natural sciences.