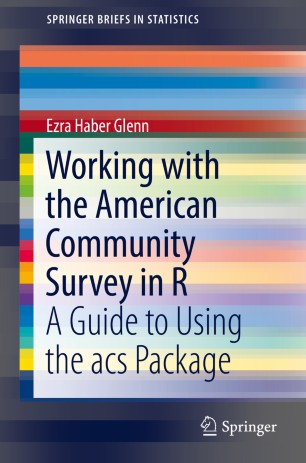 Working with the American Community Survey in R

A Guide to Using the acs Package

Part of the SpringerBriefs in Statistics book series (BRIEFSSTATIST)

This book serves as a hands-on guide to the "acs" R package for demographers, planners, and other researchers who work with American Community Survey (ACS) data. It gathers the most common problems associated with using ACS data and implements functions as a package in the R statistical programming language.  The package defines a new "acs" class object (containing estimates, standard errors, and metadata for tables from the ACS) with methods to deal appropriately with common tasks (e.g., creating and combining subgroups or geographies, automatic fetching of data via the Census API, mathematical operations on estimates, tests of significance, plots of confidence intervals).

Ezra Haber Glenn, AICP, is Lecturer in the Housing, Community, and Economic Development Group of MIT's Department of Urban Studies and Planning, where he teaches on both community development practice and quantitative methods for planning. He has taught urban planning, politics, and GIS mapping as well at Tufts University and the University of Massachusetts at Lowell. Ezra is also the developer and maintainer of the "acs" package in the R Statistical Language, which helps users download and work with data from the American Community Survey in R.