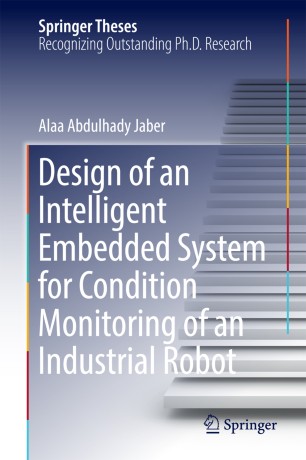 This thesis introduces a successfully designed and commissioned intelligent health monitoring system, specifically for use on any industrial robot, which is able to predict the onset of faults in the joints of the geared transmissions. However the developed embedded wireless condition monitoring system leads itself very well for applications on any power transmission equipment in which the loads and speeds are not constant, and access is restricted. As such this provides significant scope for future development.

Three significant achievements are presented in this thesis. First, the development of a condition monitoring algorithm based on vibration analysis of an industrial robot for fault detection and diagnosis. The combined use of a statistical control chart with time-domain signal analysis for detecting a fault via an arm-mounted wireless processor system represents the first stage of fault detection. Second, the design and development of a sophisticated embedded microprocessor base station for online implementation of the intelligent condition monitoring algorithm, and third, the implementation of a discrete wavelet transform, using an artificial neural network, with statistical feature extraction for robot fault diagnosis in which the vibration signals are first decomposed into eight levels of wavelet coefficients.

Dr Alaa Abdulhady Jaber has published seven international, peer-reviewed journal papers, with further three submitted and under review, with three more in preparation. Also, six papers have been published at different international conferences. As a result of these achievements, he has received a number of awards and Certificates of Merits from: the Iraqi Ministry of Higher Education and Scientific Research, the School of Mechanical and Systems engineering/ Newcastle University and the Iraqi Cultural Attaché in London.

“The book provides great information for those interested in exploring similar solutions for online monitoring of complicated systems, from robots to airplane part fault diagnostics. … In all, this excellent published thesis is very methodically organized and researched. The information is pertinent to a wide level of readers in fields such as hardware design, embedded computing, and distributed and wireless communication.” (Scott Moody, Computing Reviews, May, 2017)
Buy options