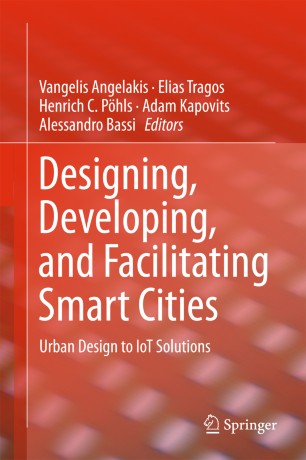 This book discusses how smart cities strive to deploy and interconnect infrastructures and services to guarantee that authorities and citizens have access to reliable and global customized services. The book addresses the wide range of topics present in the design, development and running of smart cities, ranging from big data management, Internet of Things, and sustainable urban planning. The authors cover - from concept to practice – both the technical aspects of smart cities enabled primarily by the Internet of Things and the socio-economic motivations and impacts of smart city development. The reader will find smart city deployment motivations, technological enablers and solutions, as well as state of the art cases of smart city implementations and services.

·         Provides a single compendium of the technological, political, and social aspects of smart cities;

·        Discusses how the successful deployment of smart Cities requires a unified infrastructure to support the diverse set of applications that can be used towards urban development;

Vangelis Angelakis is an Associate Professor in Mobile Telecommunications at the Department of Science and Technology of Linköping University. He had been with the Institute of Computer Science of the Foundation for Research and Technology Hellas, Greece from 2001. In 2005 he was a visiting research associate at the Institute for Systems Research of the University of Maryland in College Park, USA. In 2009, he joined Linköping University, since then he has been a visiting researcher in the UK, China, Greece, Spain, and is also a visiting scholar at MAPCI/Lund University, Sweden. He has published over 50 articles in journals and conferences and is an associate editor of the IEEE/KICKS Journal of Communications and Networks and has received support from national funding bodies in Sweden and in Greece, and from the EU within the FP7 and H2020. His research interests revolve around the design of telecommunication systems and networks resources optimization with a focus on the fog computing, the Internet of Things, and Smart City applications.

Dr. Elias Z. Tragos is a researcher in the Telecommunications and Networks Laboratory (TNL) of the Institute of Computer Science of the Foundation for Research and Technology, Hellas (FORTH-ICS). Dr Tragos has a PhD in wireless communications and a Master’s degree in Business Administration (MBA) in Techno-Economics. He has been actively involved in many EU (i.e. WINNER, EU-MESH, REDComm, MESH-WISE, SOrBet, WiVi-2020) and national projects, as well as in various research clusters, i.e. the Wireless World Initiative (WWI). Dr. Tragos is currently the technical coordinator of the EU-FP7-SMARTCITIES-RERUM which focuses on security, privacy and reliability of Internet of Things. Dr. Tragos is also actively involved in the Internet of Things European Research Cluster (IERC), which is the main element of promoting IoT research in Europe. Dr. Tragos is currently the chair of Activity Chain 5 (Trusted IoT) and has contributed many Activity Chains. Dr .Tragos has also contributed to the yearly editions of the IERC Cluster Book and the IERC Strategic Research Agenda the last 3 years. Dr. Tragos has published more than 60 peer reviewed conference and journal papers, receiving more than 900 citations.

Henrich C. Pöhls holds a graduate diploma in computer science (Dipl. Inf.) from University of Hamburg and an M.Sc. in Information Security from Royal Holloway University of London. Over a decade, since 2004, he is doing academic research and authored and co-authored many academic publications and book chapters.

He currently tweaks a class of digital signatures, cryptographically known as redactable and sanitizable signatures, to achieve legal compliance and make their privacy enhancing features suitable for an application in various domains, such as the Internet-of-Things, e.g. within the EU-FP7 project RERUM, or Cloud Computing for the EU H2020 project PRISMACLOUD. Henrich C. Pöhls often takes a step back to gain an interdisciplinary bird's eye view on IT Security covering the field of cryptography, software development and law: The more gaps between those three worlds can be bridged, the more sound (sound = privacy-preserving and secure and legally compliant) IT-enhanced products and environments like smart homes or smart cities become.

Adam Kapovits has more than 25 years of professional experience in academic and industry research. He joined Eurescom, the leading organisation for managing collaborative R&D in telecommunications more than 15 years ago as programme manager, focusing first mainly on the networking layer. In these areas he has managed a large number of studies and projects on topics which are of concern to the Eurescom member community of European telecom network operators and the European telecom industry at large. He has participated in a number RTD projects and co-ordinated the EU FP7 project CHANGE that concerned software defined networking and currently co-ordinates the RERUM project focusing on "REliable, Resilient and secUre IoT for sMart city applications", and co-leads the IoT European research Cluster (IERC) activity chain on Trusted IoT (including security and privacy). In parallel, recently, Adam has co-ordinated a European Space Agency study on "Service delivery over integrated satellite terrestrial networks" and currently leads two studies, one on "Scenarios for integration of satellite components in future networks" and another concerning "Satcom integration with LTE-based core network emulator". Adam is also involved in the ESA study SPECSI – Strategic Positioning of the European/Canadian SatCom industry. Thus one of Adam’s main interest is the convergence of terrestrial and satellite communication in the 5G context. Adam was also the co-editor of the 5G-PPP white paper on the energy vertical having also a strong relevance to IoT. Adam considers IoT as the emerging dominant application domain of 5G, next to content delivery. In addition to having a strong focus on the 5G, satellite and IoT triangle, Adam is specifically interested to advance the security and privacy of IoT.

Alessandro Bassi graduated in 1994 in Computer Science. In his early career, he worked for Amadeus, University of Tennessee, Ecole Normale Superieure in Lyon, France and RIPE NCC. In Nov. 2004 he joined Hitachi Europe. Since Sept. 2010 he is an Independent Consultant, working on topics related to Internet of Things, Cloud Storage and Smart Cities. He was the Technical Coordinator of the 'Internet of Things - Architecture" (IoT-A) EU funded project, which was the European lighthouse project regarding  the Internet of Things . He authored a book, "Enabling Things to Talk", on Internet of Things. He was a member of the IoT Expert Group, nominated by the European Commission (2010-2012), to help the European Policymakers in this domain. Alessandro has been a keynote speaker in more than 100 events.