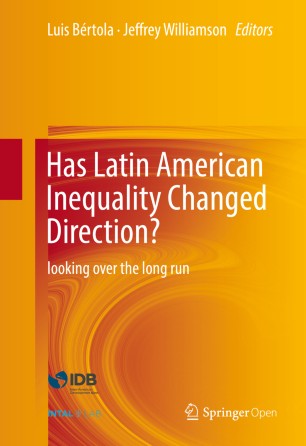 Looking Over the Long Run

This book brings together a range of ideas and theories to arrive at a deeper understanding of inequality in Latin America and its complex realities. To so, it addresses questions such as: What are the origins of inequality in Latin America? How can we create societies that are more equal in terms of income distribution, gender equality and opportunities? How can we remedy the social divide that is making Latin America one of the most unequal regions on earth? What are the roles played by market forces, institutions and ideology in terms of inequality?

In this book, a group of global experts gathered by the Institute for the Integration of Latin America and the Caribbean (INTAL), part of the Inter-American Development Bank (IDB), show readers how various types of inequality, such as economical, educational, racial and gender inequality have been practiced in countries like Brazil, Bolivia, Chile, Mexico and many others through the centuries.

Presenting new ideas, new evidence, and new methods, the book subsequently analyzes how to move forward with second-generation reforms that lay the foundations for more egalitarian societies. As such, it offers a valuable and insightful guide for development economists, historians and Latin American specialists alike, as well as students, educators, policymakers and all citizens with an interest in development, inequality and the Latin American region.

Professor at the Economic and Social History Program, director of the Ph.D. and Master Programme, since 2005; Visiting Professor at the University of Gothenburg since 2010; Member of the Bureau of the International Economic History Association 2009-2015; CEPR Associate; member of the Figuerola Institute, Universidad Carlos III, Madrid; Director of the Montevideo-Oxford Latin American Economic History Data Base. Was editor of the Journal of Iberian and Latin American Economic History Review. Co-author of The Economic Development of Latin America since Independence (Oxford University Press, 2012) and of several articles and book chapters of international publications during the last years. Has been advisor for ECLAC, IADB, ILO, NU and several national institutions in Uruguay and Latin America.

The Laird Bell Professor of Economics, emeritus, Harvard University and Honorary Fellow, Department of Economics, University of Wisconsin-Madison, Williamson is past President of the Economic History Association (1994-1995), Chairman of the Harvard Economics Department (1997-2000), and Master of Harvard’s Mather House (1986-1993).