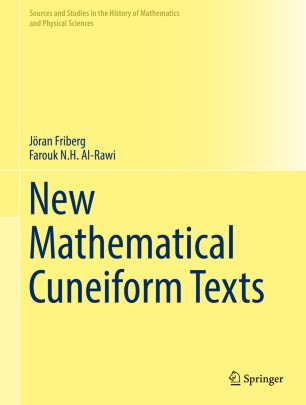 This monograph presents in great detail a large number of both unpublished and previously published Babylonian mathematical texts in the cuneiform script. It is a continuation of the work A Remarkable Collection of Babylonian Mathematical Texts (Springer 2007) written by Jöran Friberg, the leading expert on Babylonian mathematics.
Focussing on the big picture, Friberg explores in this book several Late Babylonian arithmetical and metro-mathematical table texts from the sites of Babylon, Uruk and Sippar, collections of mathematical exercises from four Old Babylonian sites, as well as a new text from Early Dynastic/Early Sargonic Umma, which is the oldest known collection of mathematical exercises. A table of reciprocals from the end of the third millennium BC, differing radically from well-documented but younger tables of reciprocals from the Neo-Sumerian and Old-Babylonian periods, as well as a fragment of a Neo-Sumerian clay tablet showing a new type of a labyrinth are also discussed. The material is presented in the form of photos, hand copies, transliterations and translations, accompanied by exhaustive explanations. The previously unpublished mathematical cuneiform texts presented in this book were discovered by Farouk Al-Rawi, who also made numerous beautiful hand copies of most of the clay tablets.
Historians of mathematics and the Mesopotamian civilization, linguists and those interested in ancient labyrinths will find New Mathematical Cuneiform Texts particularly valuable. The book contains many texts of previously unknown types and material that is not available elsewhere.