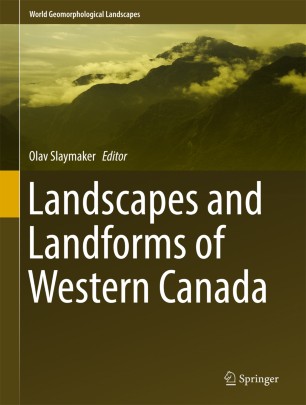 Landscapes and Landforms of Western Canada

This is the only book to focus on the geomorphological landscapes of Canada West. It outlines the little-appreciated diversity of Canada’s landscapes, and the nature of the geomorphological landscape, which deserves wider publicity. Three of the most important geomorphological facts related to Canada are that 90% of its total area emerged from ice-sheet cover relatively recently, from a geological perspective; permafrost underlies 50% of its landmass and the country enjoys the benefits of having three oceans as its borders: the Arctic, Pacific and Atlantic oceans. Canada West is a land of extreme contrasts — from the rugged Cordillera to the wide open spaces of the Prairies; from the humid west-coast forests to the semi-desert in the interior of British Columbia and from the vast Mackenzie river system of the to small, steep, cascading streams on Vancouver Island. The thickest Canadian permafrost is found in the Yukon and extensive areas of the Cordillera are underlain by sporadic permafrost side-by-side with the never-glaciated plateaus of the Yukon. One of the curiosities of Canada West is the presence of volcanic landforms, extruded through the ice cover of the late Pleistocene and Holocene epochs, which have also left a strong imprint on the landscape. The Mackenzie and Fraser deltas provide the contrast of large river deltas, debouching respectively into the Arctic and Pacific oceans.

Olav Slaymaker Member of the Order of Canada, is a professor emeritus of geography in the Department of Geography at the University of British Columbia, Vancouver, BC.
His 20+ co-authored and edited monographs and 160+ refereed papers reflect three distinct styles of work. First, he has pursued original field research for 40 years on sediment systems in the Canadian Cordillera and the European Alps, strongly supported and enhanced by his stellar doctoral and postdoctoral students and international
colleagues. Second, he has produced papers and books summarizing trends in land use and environmental change in mountain regions. Third, he has edited monographs with invited international contributions on major environmental and geomorphological themes. He is a former President of the Canadian Association of Geographers and a former
President of the International Association of Geomorphologists.

“Wherever you are in western Canada, this book has something to offer you, something to teach you about the landscapes you live among or are driving through on a summer adventure. … The book is filled with hundreds of maps, graphs, and photographs, which really help to bring the stories to the reader. … this book is a must-have for anyone who is enthusiastic about learning the stories behind the landscapes around them.” (Syd Cannings, bcbooklook.com, September, 2018)
Buy options