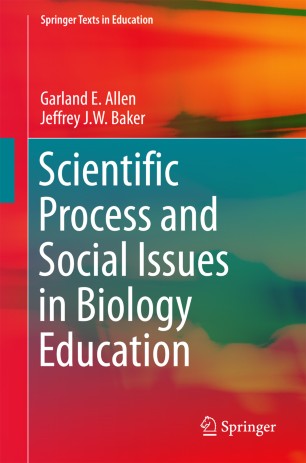 Part of the Springer Texts in Education book series (SPTE)

This book complements fact-drive textbooks in introductory biology courses, or courses in biology and society, by focusing on several important points: (1) Biology as a process of doing science, emphasizing how we know what we know. (2) It stresses the role of science as a social as well as intellectual process, one that is always embedded in its time and place in history.
In dealing with the issue of science as a process, the book introduces students to the elements of inductive and deductive logic, hypothesis formulation and testing, the design of experiments and the interpretation of data. An appendix presents the basics of statistical analysis for students with no background in statistical reasoning and manipulation.  Reasoning processes are always illustrated with specific examples from both the past (eighteenth and nineteenth century) as well as the present.
In dealing with science and social issues, this book introduces students to historical, sociological and philosophical issues such as Thomas Kuhn’s concept of paradigms and paradigm shifts, the social-constructions view of the history of science, as well as political and ethical issues such human experimentation, the eugenics movement and compulsory sterilization, and religious arguments against stem cell research and the teaching of evolution in schools.
In addition to specific examples illustrating one point or another about the process of biology or social-political context, a number of in-depth case studies are used to show how scientific investigations are originated, designed, carried out in particular social/cultural contexts. Among those included are: Migration of monarch butterflies, John Snow’s investigations on the cause of cholera, Louis Pasteur’s controversy over spontaneous generation, the mass extinction of the dinosaurs,  and the Tuskegee syphilis experiment.