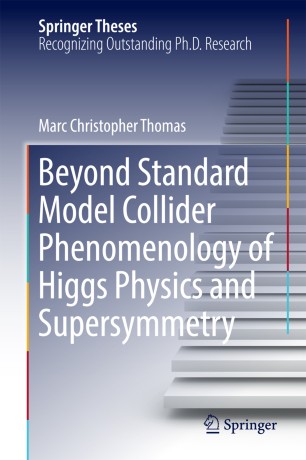 Beyond Standard Model Collider Phenomenology of Higgs Physics and Supersymmetry

This thesis studies collider phenomenology of physics beyond the Standard Model at the Large Hadron Collider (LHC). It also explores in detail advanced topics related to Higgs boson and supersymmetry – one of the most exciting and well-motivated streams in particle physics. In particular, it finds a very large enhancement of multiple Higgs boson production in vector-boson scattering when Higgs couplings to gauge bosons differ from those predicted by the Standard Model. The thesis demonstrates that due to the loss of unitarity, the very large enhancement for triple Higgs boson production takes place. This is a truly novel finding.
The thesis also studies the effects of supersymmetric partners of top and bottom quarks on the Higgs production and decay at the LHC, pointing for the first time to non-universal alterations for two main production processes of the Higgs boson at the LHC–vector boson fusion and gluon–gluon fusion.
Continuing the exploration of Higgs boson and supersymmetry at the LHC, the thesis extends existing experimental analysis and shows that for a single decay channel the mass of the top quark superpartner below 175 GeV can be completely excluded, which in turn excludes electroweak baryogenesis in the Minimal Supersymmetric Model. This is a major new finding for the HEP community.
This thesis is very clearly written and the introduction and conclusions are accessible to a wide spectrum of readers.