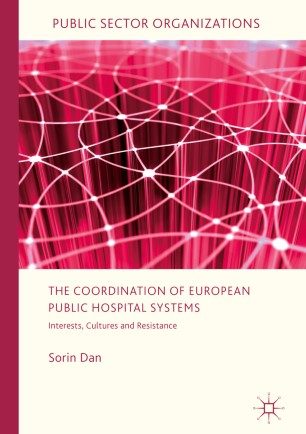 ‘A clear, thorough, comparative work.  Dan offers the reader a careful, nuanced analysis, structured by partly competing, partly complementary theoretical perspectives.  His exploration of the similarities and differences between western and eastern European cases is particularly interesting.’
– Christopher Pollitt, Emeritus Professor, Public Governance Institute, KU Leuven, Belgium
‘A comparative book that looks into the impact of New Public Management reforms on the coordination of organizations in one of the key targets of reforms: public hospital systems.  It offers a rich empirical account of reform trends and coordination challenges in public hospitals in Estonia, Romania and Norway.’
– Trui Steen, Associate Professor, Public Governance Institute, KU Leuven, Belgium
‘This is an important contribution to the study of how administrative reforms in the hospital sector in different countries have affected national coordination. The book raises research questions which are important both from a theoretical and a practical point of view. It gives a very good overview of health systems and hospital administration in three European countries which deserve attention by both academics and policy-makers globally.’
– Per Lægreid, Professor, Department of Administration and Organisation Theory, University of Bergen, Norway
This book engages theoretically and empirically with the unprecedented wave of public management reforms in public hospitals in Europe in the past 25 years. It provides a useful overview of these reforms and studies the way in which they have influenced the ability of national policy-making institutions to co-ordinate the system of public hospitals as a whole. Using a comparative structure, as well as original empirical data collected by the author, the book examines case studies on which little has so far been published for an international audience in English.
Sorin Dan has worked as Policy Analyst at the OECD on public governance reform with countries such as Lithuania, Romania and Slovak Republic as well as the OECD more generally. He was previously a Doctoral Researcher at the Public Governance Institute, KU Leuven, Belgium where he completed his doctoral thesis. While in Leuven he was part of the COCOPS project team, a major EU-funded international research project. His work on public administration and healthcare reform has appeared in different international journals.