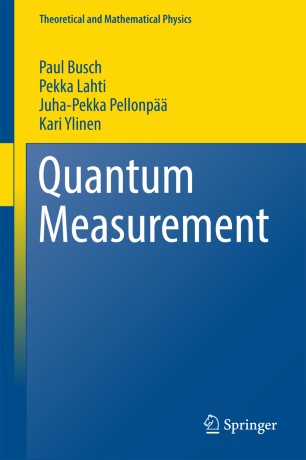 This is a book about the Hilbert space formulation of quantum mechanics and its measurement theory. It contains a synopsis of what became of the Mathematical Foundations of Quantum Mechanics since von Neumann’s classic treatise with this title. Fundamental non-classical features of quantum mechanics—indeterminacy and incompatibility of observables, unavoidable measurement disturbance, entanglement, nonlocality—are explicated and analysed using the tools of operational quantum theory.

The book is divided into four parts: 1. Mathematics provides a systematic exposition of the Hilbert space and operator theoretic tools and relevant measure and integration theory leading to the Naimark and Stinespring dilation theorems; 2. Elements develops the basic concepts of quantum mechanics and measurement theory with a focus on the notion of approximate joint measurability; 3. Realisations offers in-depth studies of the fundamental observables of quantum mechanics and some of their measurement implementations; and 4. Foundations discusses a selection of foundational topics (quantum-classical contrast, Bell nonlocality, measurement limitations, measurement problem, operational axioms) from a measurement theoretic perspective.

The book is addressed to physicists, mathematicians and philosophers of physics with an interest in the mathematical and conceptual foundations of quantum physics, specifically from the perspective of measurement theory.