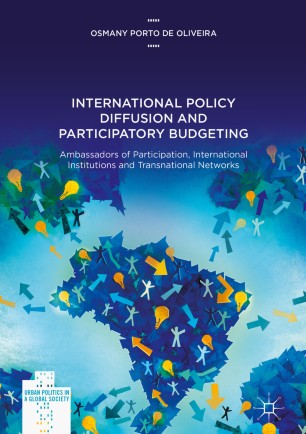 ‘This is a pioneering study. It raises the big questions of how ideas of democratic participation spread, and why they “stick” or do not. We don’t have anything comparable in the field of local government, urban planning or comparative politics to rival the spread of Participatory Budgeting. The trend in urban studies internationally is to move from localized case studies to comparative studies involving different cities, but this research goes further with both comparative case studies in several continents, and the description and analysis of a general process of diffusion.’
– Richard Stren, Emeritus Professor of Political Science, University of Toronto, Canada
‘Drawing on rich sources of data and extensive field work, Osmany Porto de Oliveira goes beyond simplistic analysis and opens up the black box of the “globalization” of Participatory Budgeting. Theorising the role of the “ambassadors of participation” in a completely unprecedented way, the book forges new analytical inroads to explore pubic policies that travel around the world. This book will undoubtedly become an extremely important reference to understand today’s world and its constant circulation of ideas and practices.’
– Gianpaolo Baiocchi, Associate Professor of Sociology, New York University, USA
‘The case discussed in this book shows that Brazil has become, to the surprise and disdain of many and pride of others, not only an importer of innovations developed abroad, but also an active and prestigious exporter of experiences originally Made in Brazil.’
– Carlos A. Pimenta de Faria, Professor of International Relations, PUC-MG University, Brazil
This book explores the international diffusion of Participatory Budgeting (PB), a local policy created in 1989 in Porto Alegre, Brazil, which has now spread worldwide. The book argues that the action of a group of individuals called “Ambassadors of Participation” was crucial to make PB part of the international agenda. This international dimension has been largely overlooked in the vast literature produced on participatory democracy devices. The book combines public policy analysis and the study of international relations, and makes a broad comparative study of PB, including cases from Latin America, Europe, and Sub-Saharan Africa. The book also presents a new methodology developed to examine PB diffusion, the “transnational political ethnography”, which combines in-depth interviews, participant observation and document analysis both at the local and transnational level.
Osmany Porto de Oliveira is Professor of International Relations at the Federal University of São Paulo (UNIFESP). He holds two PhDs in Political Science, from the University of Sorbonne Nouvelle, France, and the University of São Paulo, Brazil. He received his B.A from the University of Bologna, Italy, and an M.A from the University of Sorbonne Nouvelle/IHEAL, France. His previous book is Le transfert d'un modèle de démocratie participative: Paradiplomatie entre Porto Alegre et Saint-Denis.