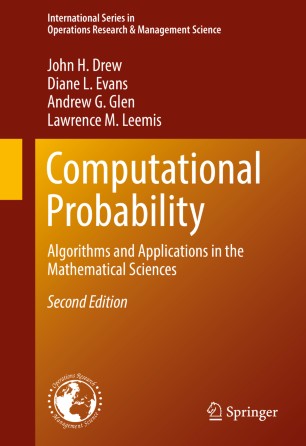 Algorithms and Applications in the Mathematical Sciences

This new edition includes the latest advances and developments in computational probability involving A Probability Programming Language (APPL). The book examines and presents, in a systematic manner, computational probability methods that encompass data structures and algorithms. The developed techniques address problems that require exact probability calculations, many of which have been considered intractable in the past. The book addresses the plight of the probabilist by providing algorithms to perform calculations associated with random variables.
Computational Probability: Algorithms and Applications in the Mathematical Sciences, 2nd Edition begins with an introductory chapter that contains short examples involving the elementary use of APPL. Chapter 2 reviews the Maple data structures and functions necessary to implement APPL. This is followed by a discussion of the development of the data structures and algorithms (Chapters 3–6 for continuous random variables and Chapters 7–9 for discrete random variables) used in APPL. The book concludes with Chapters 10–15 introducing a sampling of various applications in the mathematical sciences. This book should appeal to researchers in the mathematical sciences with an interest in applied probability and instructors using the book for a special topics course in computational probability taught in a mathematics, statistics, operations research, management science, or industrial engineering department.