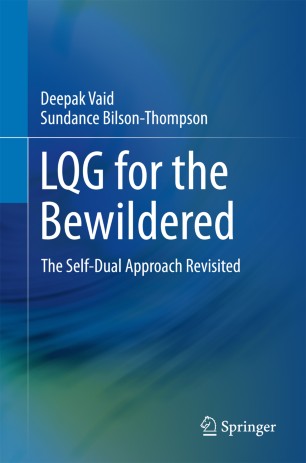 LQG for the Bewildered

This primer offers a concise introduction to Loop Quantum Gravity (LQG)
- a theoretical framework for uniting Quantum Mechanics (QM) with General Relativity (GR). The emphasis is on the physical aspects of the framework and its historical development in terms of self-dual variables, still most suited for a first, pedagogical encounter with LQG.

The text starts by reviewing GR and the very basics of Quantum Field Theory (QFT), and then explains in a concise and clear manner the steps leading from the Einstein-Hilbert action for gravity to the construction of the quantum states of geometry, known as spin-networks, and which provide the basis for the kinematical Hilbert space of quantum general relativity. Along the way the various associated concepts of tetrads, spin-connection and holonomies are introduced.

Having thus provided a minimal introduction to the LQG framework, some applications to the problems of black hole entropy and of quantum cosmology are briefly surveyed. Last but not least, a list of the most common criticisms of LQG is presented, which are then tackled one by one in order to convince the reader of the physical viability of the theory. A set of appendices provides accessible introductions to several key notions such as the Peter-Weyl theorem, duality of differential forms and Regge calculus, among others.

The presentation is aimed at graduate students and researchers who have some familiarity with the tools of QM and GR, but are intimidated by the technicalities required to browse through the existing LQG literature. This primer aims at making the formalism appear a little less bewildering to the uninitiated and helps lower the barrier for entry into the field.