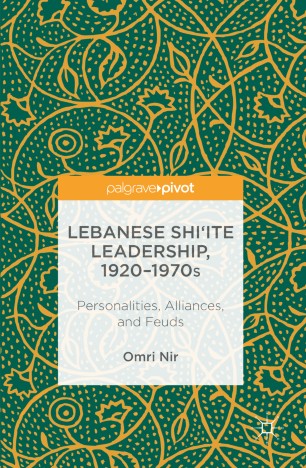 This book examines the coalitions and relationships within the power centers of Shi'ite politics during the era of political feudalism in Lebanon. The author maps the Shi'ite leadership and its inter-connections, including the alliances and rivalry between prominent Zu'ama, clans, and Ulama' from the formation of Lebanon in 1920 to the decline of old Shi'ite politics and the emergence of popular movements in the 1970s. The work also explains the role of prominent intellectuals within these power centers.
Omri Nir is a leading scholar of Lebanese history and politics and is a lecturer at the Departments of Islamic and Middle Eastern Studies at the Hebrew University of Jerusalem, Tel-Aviv University, Ben-Gurion University of the Negev, and Achva College, Israel. He is often interviewed on Lebanese issues in Israeli, international, and Arab media. He has published numerous articles and is the author of Nabih Berri and Lebanese Politics.