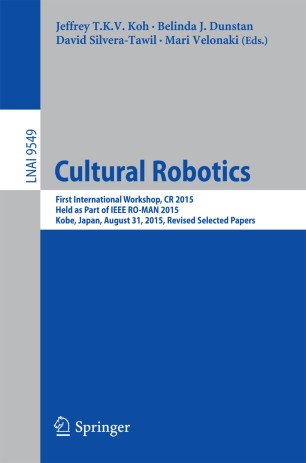 This LNAI 9549 constitutes the refereed proceedings of the First International Workshop in Cultural Robotics 2015, held as part of the 24th International Symposium on Robot and Human Interactive Communication held in Kobe, Japan, in August/September 2015.
A total of 12 full papers and 1 short paper were accepted from a total of 26 initially submitted.

The following papers are organized into four categories. These categories are indicative of the extent to which culture has influenced the design or application of the robots involved, and explore a progression in the emersion and overlap between human and robotic generated culture.