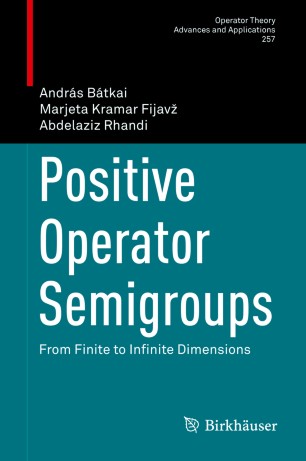 From Finite to Infinite Dimensions

This book gives a gentle but up-to-date introduction into the theory of operator semigroups (or linear dynamical systems), which can be used with great success to describe the dynamics of complicated phenomena arising in many applications. Positivity is a property which naturally appears in physical, chemical, biological or economic processes. It adds a beautiful and far reaching mathematical structure to the dynamical systems and operators describing these processes.
In the first part, the finite dimensional theory in a coordinate-free way is developed, which is difficult to find in literature. This is a good opportunity to present the main ideas of the Perron-Frobenius theory in a way which can be used in the infinite dimensional situation. Applications to graph matrices, age structured population models and economic models are discussed.
The infinite dimensional theory of positive operator semigroups with their spectral and asymptotic theory is developed in the second part. Recent applications illustrate the theory, like population equations, neutron transport theory, delay equations or flows in networks. Each chapter is accompanied by a large set of exercises. An up-to-date bibliography and a detailed subject index help the interested reader.
The book is intended primarily for graduate and master students. The finite dimensional part, however, can be followed by an advanced bachelor with a solid knowledge of linear algebra and calculus.