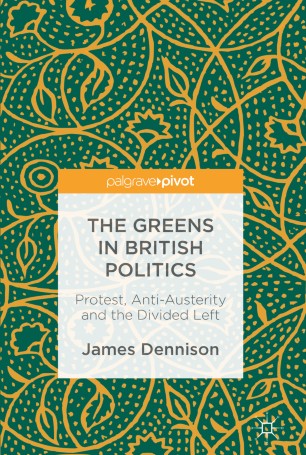 The Greens in British Politics

Protest, Anti-Austerity and the Divided Left

This book explains how the Greens went from obscurity to England’s third largest party in just one year, quadrupling their vote share and securing their place in Britain’s refigured party system on the way. Sophisticated quantitative analyses of the Greens’ voters and members as well as interviews with all of the leading party insiders are used to explain how internal dynamics, changing political opportunities and a forgotten portion of the electorate resulted in an unprecedented ‘Green Surge’ that defied decades of British party membership decline and a lack of historic far left electoral success in the UK. Not only does James Dennison untangle a fascinating political case study but he also shines a light on how technological, attitudinal and demographic changes are reshaping politics and forcing us to question many of our previous assumptions about political parties and how voters choose.