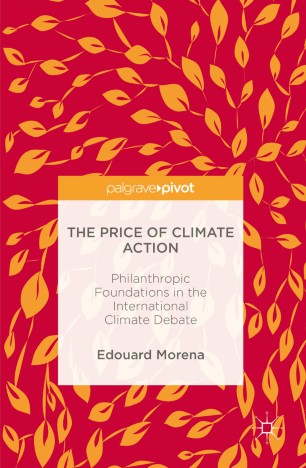 The Price of Climate Action

This book explores how a handful of liberal foundations contributed to establish and orientate the international climate regime. Looking back at the origins of international climate philanthropy and its evolution over the past three decades, the author examines the role of philanthropic foundations in the international climate debate. The research presented in this book shows that foundations, through their grant-making and convening activities, are at the heart of the climate debate. In fact, many credit them with having, through their activities prior to and at the COP, significantly contributed to laying the basis for the Paris Agreement in December 2015.
Edouard Morena is Lecturer in French and European politics at University of London Institute in Paris. Over the past five years, he has been actively monitoring non-state actors’ involvement in international environmental and development processes – and in particular the UNCSD and UNFCCC.