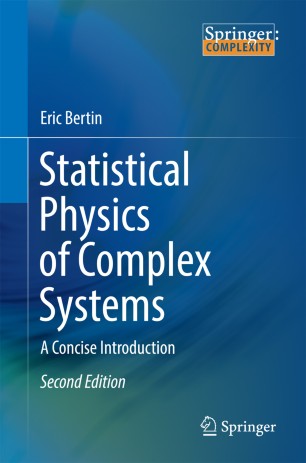 This course-tested primer provides graduate students and non-specialists with a basic understanding of the concepts and methods of statistical physics and demonstrates their wide range of applications to interdisciplinary topics in the field of complex system sciences, including selected aspects of theoretical modeling in biology and the social sciences.

Generally speaking, the goals of statistical physics may be summarized as follows: on the one hand to study systems composed of a large number of interacting units, and on the other to predict the macroscopic, collective behavior of the system considered from the perspective of the microscopic laws governing the dynamics of the individual entities. These two goals are essentially also shared by what is now called 'complex systems science', and as such, systems studied in the framework of statistical physics may be considered to be among the simplest examples of complex systems – while also offering a rather well developed mathematical treatment.

The second edition has been significantly revised and expanded, featuring in particular three new chapters addressing non-conserved particles, evolutionary population dynamics, networks, properties of both individual and coupled simple dynamical systems, and convergence theorems, as well as short appendices that offer helpful hints on how to perform simple stochastic simulations in practice.

Yet, the original spirit of the book – to remain accessible to a broad, non-specialized readership – has been kept throughout: the format is a set of concise, modular and self-contained topical chapters, avoiding technicalities and jargon as much as possible, and complemented by a wealth of worked-out examples, so as to make this work useful as a self-study text or as textbook for short courses.

“… a good introduction to basic concepts of statistical physics and complex systems for students and researchers with an interest in complex systems in other fields … .”

“… this short text remains very refreshing for the mathematician.”

Dr Eric Bertin obtained his Ph.D. in 2003 from the Laboratory of Condensed Matter Physics, CEA Saclay (Paris), under the supervision of Jean-Philippe Bouchaud. His research interests mainly deal with nonequilibrium statistical physics - specifically with non-Hamiltonian systems, which include for instance active particles, granular matter, foams, fluid turbulence, coupled oscillators or models of social behavior. Since July 2014 he is the leader of the Statistical Physics and Modelling team at the Laboratoire Interdisciplinaire de Physique (University of Grenoble).