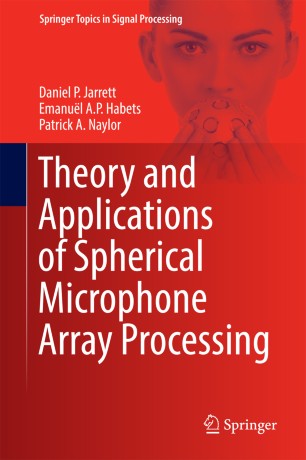 This book presents the signal processing algorithms that have been developed to process the signals acquired by a spherical microphone array. Spherical microphone arrays can be used to capture the sound field in three dimensions and have received significant interest from researchers and audio engineers. Algorithms for spherical array processing are different to corresponding algorithms already known in the literature of linear and planar arrays because the spherical geometry can be exploited to great beneficial effect.

The authors aim to advance the field of spherical array processing by helping those new to the field to study it efficiently and from a single source, as well as by offering a way for more experienced researchers and engineers to consolidate their understanding, adding either or both of breadth and depth. The level of the presentation corresponds to graduate studies at MSc and PhD level.

This book begins with a presentation of some of the essential mathematical and physical theory relevant to spherical microphone arrays, and of an acoustic impulse response simulation method, which can be used to comprehensively evaluate spherical array processing algorithms in reverberant environments.

The chapter on acoustic parameter estimation describes the way in which useful descriptions of acoustic scenes can be parameterized, and the signal processing algorithms that can be used to estimate the parameter values using spherical microphone arrays. Subsequent chapters exploit these parameters including in particular measures of direction-of-arrival and of diffuseness of a sound field.