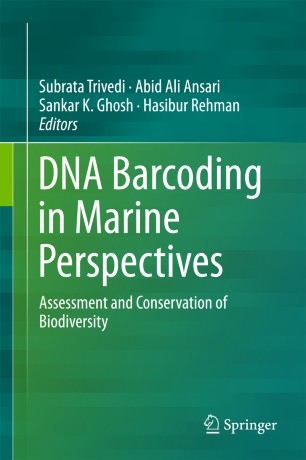 Assessment and Conservation of Biodiversity

More than two third area of our planet is covered by oceans and assessment of marine biodiversity is a challenging task. With the increasing global population, there is a tendency to exploit marine recourses for food, energy and other requirements. This puts pressure on the fragile marine environment and necessitates sustainable conservation efforts. Marine species identification using traditional taxonomical methods are often burdened with taxonomic controversies. Here in this book we will discuss the comparatively new concept of DNA barcoding and its significance in marine perspective. This molecular technique can be useful in the assessment of cryptic species which is widespread in marine environment and linking the different life cycle stages to the adult which is difficult to accomplish in the marine ecosystem. Other advantages of DNA barcoding include authentication and safety assessment of seafood, wildlife forensics, conservation genetics and detection of invasive alien species (IAS). Global DNA barcoding efforts in the marine habitat include MarBOL, CeDAMar, CMarZ, SHARK-BOL, etc. DNA barcoding of different marine groups ranging from the microbes to mammals is to be revealed. In conjugation with newer and faster techniques like high throughput sequencing, DNA barcoding is serving as an effective modern tool in marine biodiversity assessment and conservation.