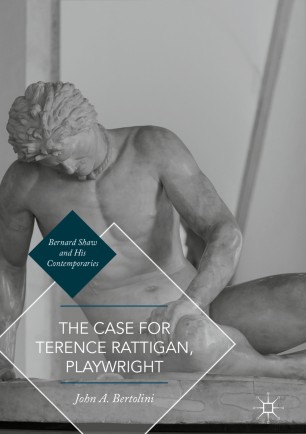 The Case for Terence Rattigan, Playwright

Part of the Bernard Shaw and His Contemporaries book series (BSC)

‘Terence Rattigan was among the most successful British playwrights of the modern era – a master of comedy as well as tragedy.  He is so incredibly good it should come as no surprise that a significant revival has been underway for some time.  In fact, Rattigan has been slowly achieving a permanent place of esteem in the essential repertoire of twentieth century dramatists.  And that place will be bolstered by this brilliant comprehensive study of the playwright’s art by John A. Bertolini.  His book is a pleasure to read:  elegantly written, persistently intelligent, and lucid, and it does exactly what it promises:  makes a case for Rattigan.’ - Jay Parini, D.E.Axinn Professor of English, Middlebury College, USA

This book asserts the extraordinary quality of mid-twentieth century playwright Terence Rattigan’s dramatic art and its basis in his use of subtext, implication, and understatement. By discussing every play in chronological order, the book also articulates the trajectory of Rattigan’s darkening vision of the human potential for happiness from his earlier comedies through his final plays in which death appears as a longed for peace. New here is the exploration through close analysis of Rattigan’s style of writing dialogue and speeches, and how that style expresses Rattigan’s sense of life. Likewise, the book newly examines how Rattigan draws on sources in Greek and Roman history, literature, and myth, as well as how he invites comparison with the work of other playwrights, especially Bernard Shaw and Shakespeare. It will appeal broadly to college and university students studying dramatic literature, but also and especially to actors and directors, and the play-going, play-reading public.